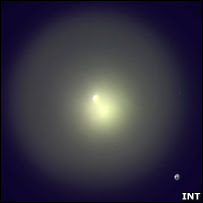 Finally , after a busy two weeks of activities associated with the Manchester Science Festival I have finally gotten round to updating my blog.

I've decided to make a personal note to myself to make a long list of projects I'm planning on developing over the course of the run up to the International Year of Astronomy and write it here so that I don't forget because with everything being so busy at the moment my brain is like a sieve (eek!) so here goes:

2. Set up creation and delivery of educational projects, training courses, etc in the form on formal and informal learning activities.

(New note to self, how many times can I fit the word "activities" in one post?!)

3. Follow up on all of the ideas and initiatives I agreed to get involved in at the CAP 07 conference in Athens last month.

4. Add to the blog a real sky diary so that visitors can actually get to read a sky diary as well as a rambling blog : )

So, here is the Sky Diary!

Here is a nice story I found on BBC News 24's site:

Comet Holmes brightens in retreat
An explosion on a distant comet, Holmes, has been examined by UK astronomers using the Isaac Newton Telescope (INT) on the Canary Islands.
The explosion was so big that the comet brightened by a factor of a million; and it can now be seen from the Northern Hemisphere with the naked eye.

Holmes is currently moving away from the Sun, and is almost midway between the orbits of Mars and Jupiter.

It was amateur astronomers who alerted the professionals to the brightening.

One of the UK observation team, Professor Alan Fitzsimmons of Queen's University, Belfast, said it was a once in a lifetime event.

"Although comets have been seen to undergo outbursts before, the scale of this dwarfed anything seen in the past century," he said.

The images from the INT show an expanding circular cloud of gas and dust emanating from the nucleus of the comet, together with a brighter cloud of material.

Professor Fitzsimmons explained: "From these images, we can see the ejecta moving away from the comet at 2,000km per hour (1,300 miles per hour). The total amount of material ejected is probably about 1% of the total mass of the comet.

"On a smaller scale, it is like the Earth suddenly threw off its crust."

It is not clear what caused this explosive event - especially since it is moving away from the Sun's energetic influence.

One possibility is that the comet was hit by a meteoroid. More probably, there has been a build-up of gas under part of the surface that catastrophically ruptured the surface last week.

Comet Holmes is a regular visitor to the inner Solar System. It takes 6.9 years to orbit the Sun once. It made its closest approach to our star last May, passing by at some 300 million km (190 million miles).

To the naked eye, Holmes appears as a fuzzy yellow dot in the night sky in the Perseus Constellation.
Posted by Cosmos Media at Sunday, November 04, 2007